- August 03, 2017
STERLING  but  BELITTLED
KISHORE KUMAR  and  LAXMIKANT-PYARELAL
It was in 1964 director Shantilal Soni was making “Mr X In Bombay” starring Kishore Kumar and Kumkum in  lead roll. Obviously, Kishore Kumar as a singer was the choce for all the songs of “Mr. X In Bombay”.  Laxmikant-Pyarelal had already made a high impact, in hindi film music,  through the songs of their earlier hit, B grade, films from “Parasmani”, “Harishchandra Taramati”, “Sati Savitri”, “Sant Gyaneshwar” & “Dosti” etc. In these films Laxmikant-Pyarelal had an opportunity to work with great singers like Lata Mangeshkar, Mukesh, Mohammad Rafi and Manna Dey to compose “A Grade” music. 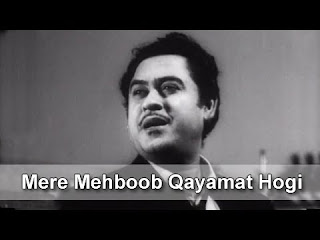 
Thus this historical song  “Mere Mehaboob Quyamat Hogi” become the first song for the STERLING but BELITTLED combo of Kishore Kumar and  Laxmikant-Pyarelal. Later on this combo of KK-LP went on to score as many as 402 songs, from 1964 to 1987. This figure of 402 is the second highest songs sung by Kishore Kumar with any music directors, first being Kishore Kumar & R D Burman with 499 songs.  Coincidently, this  historical song, “Mere Mehaboob Quyamat Hogi”,  also happens to be the first song of legendary song writer Anand Bakshi with Laxmikant-Pyarelal & Kishore Kumar, as well.  Kishore Kumar’s very first reaction / judgment for this song was correct. The song is still popular, even today.


In the combo of Kishore Kumar and  Laxmikant-Pyarelal,  402 songs with diversification,
one will always find everything, in the form of ….

This variety of songs will not be found in Kishore Kumar’s songs with any music directors. It is unfortunate that this ‘combo’ did not get the kind of recognition, acclamation which certainly deserves, unbiasedly.

YES ! Intrinsically  this ‘combo’ has given many memorable hits to Rajesh Khanna.

Moreover, Kishore Kumar have uniquely diversified his rendering style in many of the songs composed by Laxmikant-Pyarelal.

We will discuss more useful aspects of few selected songs elaborating the features of this Sterling but underestimated combo of Kishore Kumar and Laxmikant-Pyarelal.
It would be more proper to listen to the songs, listed below, after reading the write up, for each song, you will enjoy the songs, more.

One of the rarest of rare Patriotic song sung by Kishore Kumar. Laxmikant-Pyarelal have composed this song in western beats with  “Rock-N-R0ll” and “Twist” style. “Prelude” of 46 seconds is mesmerizing. Train Sound is brilliantly synchronized with the VIOLINS and ACOUSTIC  GUITAR.  One of the best song filmed on train. Kishore Kumar is simply awesome,  both in rendering and in acting, as well. The song has harmonious BONGO DRUM ‘rhythm’. It is written by Asad Bhopali

The song is based on raag “Yaman Kalyan”.  Kishore Kumar’s  soft rendering and Laxmikant-Pyarelal's SYMPHONY style orchestra arrangements with overlapping sound effects of VIOLINS, VIOLA, FLUTE and SANTOOR are the significant aspects of this song. Another beauty of this song is that Kishore Kumar  has brilliantly ‘synchronized’ the "pause" in the LP orchestra. The rhythm of the song is completely on BONGO DRUMS. The song is written by Anand Bakshi.


4) Vaada Tera Vaada …(Dushman, 1972 ) Mujra /Qawwali
First class rendering by Kishore Kumar. Kishore Kumar was reluctant to sing this song because he felt that Rafi Saab suited it more. As Laxmikant-Pyarelal had crafted the song with him in mind.  Rajesh Khanna and the composers duo hoodwinked him into singing it, by stating that they were scrapping the song because he was not ready to sing it.  This song is composed as Mujra in Qawwali style. Entire song has  “qawwali” style DHOLAK / MATAKI rhythm. SANTOOR and SARANGI are well executed in the ‘interludes”. SARANGI is also used as filler in the “mukhada” to give Mujra touch to the song. The song is written by Anand Bakshi.

Such was a craze for Rajesh Khanna and this song that a downpour of coins on the screen were seen. It was a super duper hit song in ‘Binaca Geeetmala’.

One of the finest songs from  Kishore Kumar with Laxmikant-Pyarelal. Kishore Kumar’s extremely soft and silky rendering in a totally different way and Laxmikant-Pyarelal’s westernized orchestra, very delicate rendering by CHORUS in surround sound for the “interludes”, are the features of this lovely song. The song is completely woven around the glimpses of ACOUSTIC  GUITAR (played by late Gorakh Sharma, Pyarelalji's younger brother). WHISTLE in surround sound gives the listeners Ear-Pleasing. Another beauty of this song is ‘finger pinch’ used in the ‘rhythm’, at the end of each ‘antara’. Essence of life captured beautifully in simple words by Anand Bakshi.

This romantic song is based on Raag “Tilang” starts with the ‘humming’ sound by Kishore Kumar. “Mukhada” is wonderfully synchronized by ‘filling’ SARANGI and FLUTE around Kishoreji’s melodious and romantic  rendering. All the three ‘interludes’ have different type of tunes and orchestral  arrangements. First ‘interlude’ is orchestrated with the sounds of FLUTE, VIOLINS and SANTOOR. Second ‘interlude’ is decorated with SARANGI and SAXOPHONE with overlapping sound of the VIOLINS in ‘symphony’ style. Third ‘interlude’ starts with VIOLINS, VIOLINS and SANTOOR. The song has lovely ‘DHOLAK’ beats. It is written by Anand Bakshi.

One of the rarest of rare ‘devotional’ song sung by Kishore Kumar (with Lata Mangeshkar).
“Prelude” of 34 seconds is full of traditional religious instruments, sets the mood of this extremely melodious song. Kishorji’s beautiful take off, rendering, “Krishna Krishna” is a mesmerizer. Entire song is rendered in a ‘soft’ voice and on high pitch too. The song is orchestrated with SITAR and FLUTE with the ‘rhythm’ of MRIDANGAM. Another ‘beauty’ of this “Bhajan” is the overlapping sound effect of rendering of Kishoreji and Lataji, in different tunes and notes. This song is penned by Rajendra Krishna.

Wonderful Singing by Kishore Kumar on “high notes” and perhaps one of his best songs in mid-seventies, carrying  variety. Beautifully penned by Majaroooh Sultanpuri, truly an inspire words. Wonderful decoration of highly RICH orchestra consists of CHURCH BELL (overlapping with the ‘rhythm’), GUITAR, IRANI SANTOOR, ACOUSTIC GUITAR, VIOLINs, FLUTE  and TRUMPET (Military BIGUL). Western style “rhythm” with Bongo Drums. All the three “interludes’ have three different tunes.  Another ‘killer’  part of the song is the various “pauses” given by KK-LP.

Hypnotizing orchestra from Laxmikant-Pyarelal  and stupefying rendering by Kishore Kumar. This mellifluent song is composed on Raag “Yaman Kalyan”. 13 seconds of ‘prelude’ enthrals with the sounds of VEENA and PIANO. Cool and calm rendering by Kishore Kumar with fascinate TABLA/KONGA Drum ‘rhythm’. First ‘interlude’ orchestrated with VEENA and SANTOOR. Second ‘interlude’ is decorated with PIANO and VEENA and also used as a ‘filler’ in  the second ‘antara’. Third ‘interlude’ is executed with SITAR and SAROD supported with soft surround VIOLINS. One of the best song from  KK-LP combo. The song is written by Anand Bakshi.

Exceptionally soft  rendering by Kishoreji, many pathos. In the beginning of the song Laxmikant-Pyarelal have used BICYCLE BELL sound in the ‘rhythm’ in support with KONGA Drums. Later the ‘rhythm’ pattern converted to DHOLAK.  Fascinating “interludes” are orchestrated with the instruments like solo VIOLIN,  SAROD, CLARINET, IRANI SANTOOR  and VIOLINs. The song is written by Anand Bakshi.

Spellbind, Huge and Enrich  orchestra arrangements in western style,  throughout the song. Despite Kishore Kumar’s usual shouts and Laxmikant-Pyarelal’s boisterous orchestra, the melody part of the song is not lost. The song has become a youth anthem. Kishoreji sounds  like a ‘man’ of the age of 30. This composition from Laxmikant-Pyarelal  came up with a solid riposte to their critics. All the BRASS musical instruments like TUBA and FLUGELHORN, SAXOPHONE and CLARINET along with GUITAR are wonderfully orchestrated in enrich orchestra arrangements with the powerful western ‘beats’. The song is written by Anand Bakshi.

The ‘roaring’ like sound by Kishore Kumar.  Tune and orchestra creates a strong feeling just like a man hatching conspiracy to do some crime like killing a person. The background orchestra played in the second stanza and at the end shows tremendous  mind storming of a person, Sanjeev Kumar.﻿ The song has PIANO in ‘prelude’ & in all the ‘interludes’ with beautiful DHOLAK rhythm. This song is written by Rajendra Krishna.

Unknown said…
Excellent way of putting the effort of DUO of Kishore Kumar and LP.
Appreciating your effort. All will love it.
September 7, 2018 at 6:03 PM

Anonymous said…
Everything Nice but from Karz 1980 to next song 1986 looks not so great. There must be at least 50 songs in that period which are and were very popular.
If yes needs elaboration or if not needs explanation
June 15, 2020 at 5:34 PM

RP205 said…
Thank you for this informative blog on Kishore da and great music director duo lakshmikant ji and Pyarelal ji. The information provided is very interesting and use full.
June 20, 2020 at 12:21 PM

Popular posts from this blog 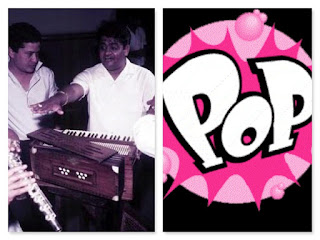 POP 'carols' and LAXMIKANT-PYARELAL 'music' The term "POP music" is originated in Britain in the mid-1950s as a description for rock and roll and the new youth music styles that it influenced. The instruments used to produce POP music are Guitars (Bass, Acoustic and  Electric), Drums, Winds & Brass, String Instruments (Violins, Viola and Cellos ), Piano, Percussion , Electric Organs, Glockenspiel or Xylophone etc are common in pop music. The most importantly rhythms, sometimes with ‘clapping’, that are “dance oriented”. In hindi film music  POP music was first introduced by great music director C. Ramchandra in early fifties.  Later it was used by O P Nayyar and Shankar-Jaikishan too.                                                                               Laxmikant-Pyarelal  have also given many POP “carols”, persistently, in their long span of 36 years (1963 - 1998). Discussing few of the best ‘pop’ style compositions orchestrated
Read more 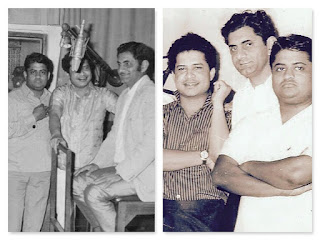 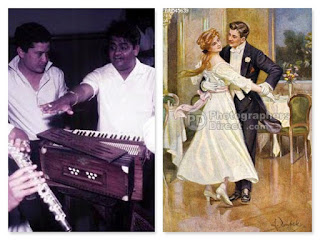 "WALTZ" Cadency and LAXMIKANT-PYARELAL Music. In Hindi Film Music many of the music directors have orchestrated WALTZ ‘rhythm’ to compose some beautiful melodies. In this topic reviewing few best songs composed by Laxmikant-Pyarelal on “WALTZ” Cadency. WALTZ   is type of musical ‘rhythm’ created for   a ballroom dance in 3/4 time with strong accent on the first beat and a basic pattern of step-step-close. WALTZ is originated from the Germany in 16th century. WALTZ, from the old German word walzen to roll, turn, or to glide. In simple words to move or glide in a lively or conspicuous manner (to advance easily and successfully). Technically speaking, a WALTZ  is a closed position dance to be performed in triple time . In layman's terms, this means that the partners both hold and face each other while dancing to a rhythm of hard-soft-soft-hard-soft-soft. Originally introduced as a ballroom dance, the catchy rhythm, combined with the fact that t
Read more

Ajay Poundarik
I am a Mechanical Engineering Graduate. Boiler Proficiency Engineer. Deeply In Love With Hindi Film Music Since 1963. Fan Of Laxmikant-Pyarelal Music. Like Test Cricket Only. Worked In The Capacity Of General Manager For The Fields Of Project Implementation, Facility Management, Construction Management and Plant Maintenance In INDIA, NIGERIA & AFGHANISTAN.